The Club, formerly known as Melbourne Heart FC, was established in 2009, inspired by a vision for a broad-based community team, celebrating cultural diversity and sporting passion through football. 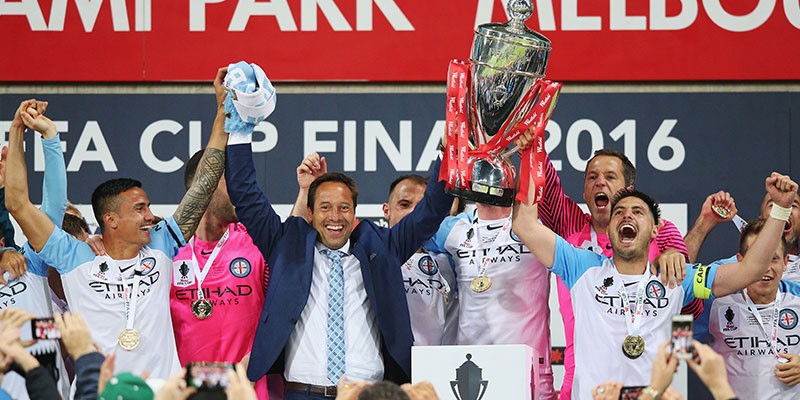 Becoming known as Melbourne City FC in 2014, the Club is wholly owned by the City Football Group and plays its home games at the 30,000 - capacity AAMI Park stadium in Melbourne, where the Club celebrated its first ever piece of Men’s silverware, the FFA Cup, in November 2016. Managed by Frenchman, Erick Mombaerts, the Club’s training and administrative base is at City Football Academy, Melbourne, on the campus of La Trobe University and is one of Australia’s leading club facilities.

The CFA Melbourne features advanced new training pitches for the Melbourne City first team, two elite youth team pitches, dedicated community pitches, world-class medical and sports science facilities and expansive office space. It is also CFG’s centre for football operations in the Asia Pacific region and the training and administration base for the affiliated Women’s team, which was founded in 2015 and competes in the W-League, the top division of women’s football in Australia.

Since becoming Melbourne City, the Club’s entire football operation has more than doubled in size, with a youth set-up expanded from one team to seven, and a W-League team announced in May 2015 taking the total number of teams to nine. The Club’s A-League side has won the FFA Cup, while the W-League team is the most successful Club in Australian women’s football history, winning four Championships and two Premierships in its five years of existence.

Melbourne City FC commenced its inaugural Westfield W-League campaign in October 2015, after Football Federation Australia confirmed the Club’s application for entry into the women’s domestic competition in May 2015.

In their inaugural season, the team completed the season with a 100 per cent record, winning 12 consecutive league matches and clinching the Premier’s Plate and securing an historic double, winning the 2016 Grand Final.

In 2017, they made history again when they won the Grand Final for a second consecutive year; the first team in the competition to win back-to-back titles. In 2018, the team went one further, entering the realms of sporting elite in completing a fairy-tale three-peat under the direction of former City captain, Patrick Kisnorbo.

In 2020, City re-wrote the record books under Head Coach Rado Vidosic, becoming the first team in the competition’s history to win four Championship titles after they secured their second invincible season with the Premiership and Championship double after defeating Sydney FC 1-0 at AAMI Park in the 2019/20 Grand Final.

Melbourne City FC’s Academy Program was introduced in 2016, when two additional development squads were established to provide a pathway for talented young Victorians.

The Club’s youth system includes the National Youth League, National Premier Leagues Seniors and U20 teams, while the Academy squads for U11–U19 players are provided with training, coaching and development opportunities within a professional environment at the City Football Academy.