New York City FC is the first and only Major League Soccer team to play in the five boroughs of New York City.

Since the Club’s incarnation in 2015, New York City FC (NYCFC) has cemented its status as a cornerstone in the landscape of one of the world's most competitive and proudest sporting cities. NYCFC was created for the City, offering a world-class soccer experience and a deep commitment to give back to New Yorkers through beautiful football, trailblazing spirit and football citizenship.

NYCFC came into existence as Major League Soccer’s 20th franchise on 21 May 2013 and debuted against Orlando City SC on 8 March 2015.

New Yorkers embraced their new Club with open arms from the start, with 20,000 season ticket holders in their inaugural season, as well as drawing an average attendance of 29,000 in their first year, making NYCFC one of the most well-supported teams in the league.

Majority owned by City Football Group, NYCFC plays its home games at Citi Field and at the iconic Yankee Stadium, which is also home to minority owner, the New York Yankees.

Sporting Director, Dave Lee, and Head Coach, Ronny Delia, a three-time title winning manager at multiple European Clubs including Celtic FC in Scotland, have continued a legacy of beautiful football. They have continued to build a roster that boasts MLS and international veterans, as well as some of the United States' rising stars. In February 2020, they were joined by Nick Cushing, who was named assistant coach following a hugely successful six seasons in charge of Manchester City Womens Football Club, where he lead the side to multiple titles. 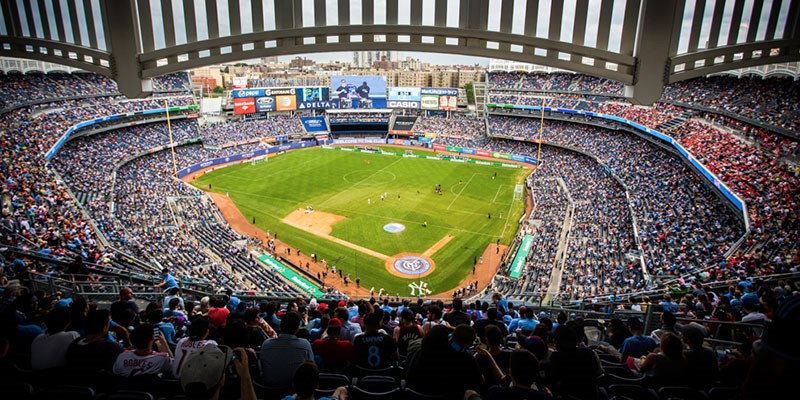 New York is a legendary sports town, as well as a thriving global city with a rapidly expanding soccer fan-base. We are thrilled to contribute to the energy and growth of New York City Soccer.

Started in 2015, the New York City FC Academy has a goal of identifying, developing and producing the best local youth soccer players in the New York Metropolitan area. The Club’s program offers a professional and competitive pathway to the highest levels of the game for area boys and girls.

The Boys Academy has seen unprecedented success across domestic competition winning back-to-back U-19 USSDA National Championships in 2018 and 2019 becoming the first Club to ever do so at that age group. NYCFC’s First Team also features four Homegrown players including Joe Scally who was sold to German Club Borussia Monchengladbach last year in a move that featured the highest initial transfer fee paid for a 16-year-old MLS player in league history.

The Girls Academy Program provides an elite training environment for girls. In March 2019, NYCFC and World Class FC announced the formation of a new strategic partnership to create the NYCFC / World Class FC Girls Youth Academy commencing with the 2019/20 season. NYCFC and World Class FC combined resources to form one program and competes exclusively in the Elite Clubs National League (ECNL) across the U-12 to U-19 age groups. This new direction expands the Academy’s number of teams. The goal of this program is to develop national team level players and excellent student/athletes who will be able to compete at the top levels of collegiate soccer.

City in the Community (CITC) NY – the 501 (c)(3) charity foundation proudly supported by New York City FC – was launched in New York City in December 2014 and currently serves 5,000 young New Yorkers each year. This builds on City Football Group’s long-standing tradition of community initiatives in NYC. In 2010, Manchester City FC and the UAE Embassy built a rooftop soccer pitch at PS72 (East Harlem’s Lexington Academy), and in 2013, NYCFC was officially launched on that same pitch. CITC NY uses the power of soccer to promote health, education and leadership development and create safe community spaces, where programming is free of charge. Core programming includes New York City Soccer Initiative (NYCSI) – a first-of-its-kind $3 million public-private partnership to build and maintain 50 mini-pitches across the City over five years – Soccer Bloc, Saturday Night Lights, Youth Leadership, and Healthy Hat-Trick and RoboSoccer. CITC NY has received national recognition in the United States and has been selected twice as a finalist for ESPN’s Sports Humanitarian of the Year Award. In addition, NYCFC was named 2016 and 2019 Major League Soccer Community Relations Team of the Year and Young Leader and Yasmine Sanchez was awarded the ESPN Billie Jean King Award.