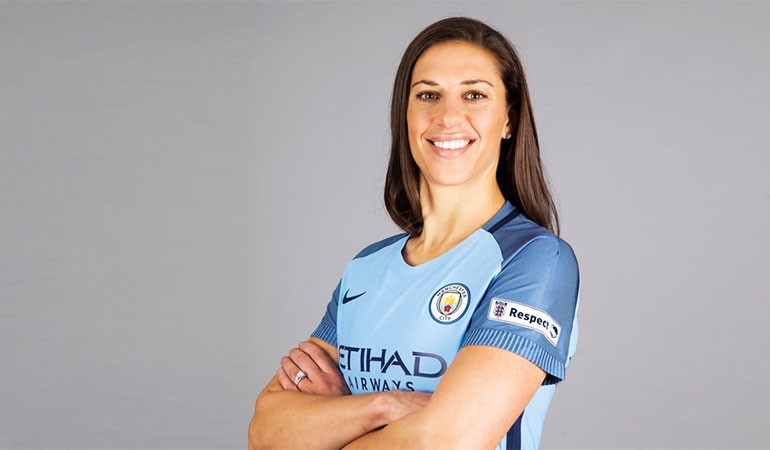 Manchester City Women celebrated double success by winning the Women’s Super League Title and FA WSL Continental Tyres Cup, in a season where the team remained undefeated throughout the League campaign, and continued to break domestic attendance records in the women’s game.

Lloyd will begin training with the squad in early March following the She Believes Cup in the United States and will feature in Manchester City’s UEFA Women’s Champions League quarter final tie against Danish side Fortuna Hjorring.

I’m incredibly excited to be joining Manchester City, a Club which is leading the development of women’s football both on and off the pitch. Having played in the US throughout my career, the chance to fulfil a long held ambition to test myself in a new footballing environment, as well as playing in the Champions League, is something I am relishing. With the challenge of the Spring Series and the FA Women’s Cup ahead of us too, I really can’t wait to pull on my City shirt in front of our fans and make them proud.

We are a successful team but a young team too, having only entered the Women’s Super League three years ago, so adding players to our squad with substantial experience is crucial to our development. Carli has had an incredible career and is recognised as one of the best in the world. There is much we can learn from her that will help us to improve as a team. We are all looking forward to working with her over the coming months.

Formerly known as Manchester City Ladies FC, the club was founded in 1988 by City in the Community. In the 25 years since then, their affiliation with the men’s team has taken various forms, culminating in the statement of a formal partnership with Manchester City in August 2012. The Club was granted entry to the FA Women’s Super League in April 2013 and subsequently re-launched as Manchester City Women’s Football Club in January 2014.

The Club mirrors and benefits from its association with its male equivalent and is structured in all aspects of its operations to take advantage of the resources of the wider organisation – from community programmes, to youth development, scouting, coaching, sports science, digital coverage and first team football operations.

In their inaugural season under Head Coach Nick Cushing, Manchester City Women’s Football Club made history when they clinched their first ever trophy, the FA WSL Continental Cup. In the 2015 campaign, the Club finished second place in the FA WSL and with it secured UEFA Women’s Champions League football for the 2016 season. In 2016, the Club celebrated their most successful season to date being crowned the FA WSL Champions for the first time in their history and lifted the FA WSL Continental Tyres Cup for a second time.