Manchester, UK, and Seoul, Korea, Mar. 17, 2017 – Leading English Premier League Club, Manchester City has become the first EPL Club to announce an Official Sleeve Partner. Existing Club partner, Korean tire giant, Nexen Tire, has renewed its partnership with the Club and becomes the first brand to take advantage of the exciting new asset, which kicks in from the start of the 2017/18 Premier League campaign. The Nexen Tire logo will appear on the sleeve of the Manchester City playing shirt for all Premier League games.

The partnership has also been extended to include Women’s Super League and League Cup winners, Manchester City Women. 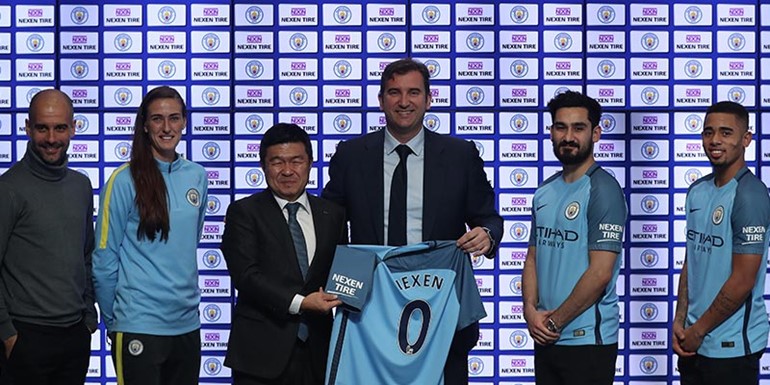 Nexen Tire has focused on establishing various marketing platforms in recent years as it expands its global presence. Through this partnership expansion, Nexen Tire will fully utilise all its upgraded partnership assets and rights to expand its global business and brand.

The partnership, celebrated at a signing ceremony at the City Football Academy in Manchester City was attended by Nexen and City executives, alongside the Club’s manager, Pep Guardiola with City stars Gabriel Jesus, İlkay Gündoğan and Jill Scott.

Through the partnership, Nexen Tire will continue to be a significant presence at all Manchester City Premier League and domestic cup matches, helping the Korean brand to grow its visibility and presence across the world.

Nexen Tire originally partnered with the Club in August 2015 and in that time, has created several memorable activations and pieces of content, including football challenges with first team players Raheem Sterling, Kelechi Iheanacho and Nolito.

As a Korean company, we consider it an honour to announce the first EPL Club sleeve branding partnership for one of the world’s greatest football clubs, Manchester City, introducing the Nexen Tire brand to football fans worldwide. Utilising Manchester City and Nexen Tire’s partnership as a key strategic marketing platform, Nexen Tire expects to increase the value of its business as a global company. At Nexen Tire, our world-class products continue to make inroads with customers around the world.

We are delighted to continue our successful partnership with Nexen Tire. At Manchester City, we are always striving to take an original approach to our commercial partnerships, creating great relationships and great content for our fans. We are especially pleased to be the first Premier League Club to secure an Official Sleeve Partner. Nexen is an exciting and growing brand and we are extremely happy both to have extended and grown our relationship.

Under manager Pep Guardiola, one of the most highly decorated managers in world football, the Club plays its domestic and UEFA Champions League home fixtures at the Etihad Stadium, a spectacular 55,000 seat arena that City have called home since 2003. Today, the Stadium sits on the wider Etihad Campus, which also encompasses the City Football Academy, a world-leading first team training and youth development facility located in the heart of East Manchester. Featuring a 7,000 capacity Academy Stadium, the City Football Academy is also where Manchester City Women’s Football Club and the Elite Development Squad train on a daily basis and play their competitive home games.

Nexen Tire, established in 1942, is a global tire manufacturer headquartered in Yangsan, South Gyeongsang Province, and in Seoul, South Korea. Nexen Tire, one of the world’s fastest growing tire manufacturers, works with 491 dealers based in 141 countries around the world (as of July 2015) and owns three manufacturing plants – two in Korea (Yangsan and Changnyeong) and one in Qingdao, China.

Another plant in Zatec, Czech Republic will be operational by 2018. Nexen Tire produces tires for passenger cars, SUVs, and light trucks with advanced technology and excellence in design. The company also focuses on producing UHP tires, which are based on advanced technologies. Nexen Tire supplies OE tires to global car makers in various countries around the world. In 2014, the company achieved a grand slam of the world‘s top 4 design awards for the first time amongst the various tire makers in the world.