Back to Press Releases 10 SEPTEMBER 2020 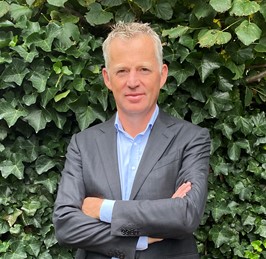 The newly created position, which reports directly to CFG Chief Executive Officer Ferran Soriano, will see Roel take responsibility for the leadership and coordination of club business operations for all ten clubs at City Football Group.

Born and educated in the Netherlands, Roel has worked in various global executive positions over the last 25 years. His career at Nissan Motor Corporation has taken him and his family from Amsterdam to Johannesburg to Tokyo and Paris.

He managed the commercial businesses in South Africa and in Europe, looked after vehicle development projects and spent 10 years as the global Chief Marketing Officer, based in Japan. In this position he was responsible for all marketing activities worldwide and he was credited with significant brand value increase.

During his period as CMO Roel initiated and implemented strategic investments in the world of sport. He concluded partnerships with the UEFA Champions league, the Rio Olympics, the International Cricket Board (ICC), City Football Group, the NBA in China as well as various individual sport stars, most notably a partnership with Usain Bolt.

“Our vision at City Football Group is to continue to grow our global footprint, our service offerings and our investments, whilst trying to win on every pitch that we play.

To enable us to be successful in this next phase, we need to evolve again as an organisation. We want to ensure that we deal with the challenges and opportunities in our new clubs and businesses as effectively and efficiently as possible. Roel’s appointment is central to our achieving this. He is highly experienced and extremely talented and will bring very valuable know-how in managing a global business.  He is the perfect fit for the role.”

“I am very excited to join the team at City Football Group. CFG has proven to be one of the most innovative companies in the world of sports and they bring the best of the game to players, fans and all partners.

I have watched the expansion of the Group as it moved from the early investments in New York City FC, Melbourne City FC and Yokohama F Marinos through to the stable of ten clubs which we see today.  There are no plans to stand still at CFG and I’m excited to be part of the next stage of its growth.”

Omar Berrada, who was previously Manchester City’s Chief Operating Officer, takes the newly created global role of Chief Football Operations Officer, coordinating and optimising group football operations of almost 100 teams across ten clubs.  The technical side of football will continue to be led by Txiki Begiristain at Manchester City and Brian Marwood for all other teams.